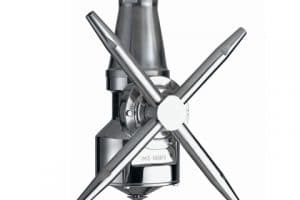 The ISO-MIX Rotary Jet Mixer allows Carlsberg to dramatically cut fermentation time and increase capacity from 4.5 to 6.5 mhl without the need for additional vessels.

Following the ‘Creating a stir’ article in the International Brewer & Distiller magazine (Volume 7. Issue 10. October) Tank Cleaning Technologies are pleased to confirm their involvement and technical support of the novel ISO-MIX rotary jet mixing technology at Carlsberg Northampton. The ISO-MIX system has allowed the brewery to dramatically cut fermentation time and increase capacity.

Carlsberg UK made a plant wide investment in the ISO-MIX Rotary Jet mixing technology, installing the mixers across 27 FV and storage/maturation tanks.

The ISO-MIX rotary jet head with its four rotating nozzles is positioned under the liquid surface, supported on the feed pipe. An external pump recirculates the contents from the bottom of the tank through the mixer which rotates in two axes ensuring full coverage and mixing of the tank.
Using the Rotary Jet Mixer within the Fermenter influences three process phases; fermentation, diacetyl conversion and cooling. During fermentation, mixing can lead to a shorter lag phase by ensuring the pitched yeast is distributed evenly/homogeneously throughout the vessel. Equally the end of fermentation is reached sooner by avoiding the settling out of yeast and ensuring there is optimal contact between the yeast and fermentable sugars. Improved mixing is also found to have a positive effect on diacetyl breakdown allowing diacetyl acceptance to be reached much quicker than in vessels with no mixing. Crash cooling also benefits from the mixing, forced convection currents are proved to reduce cooling times by 23%. PHE Chiller’s within the recirculation loop can also be used to compliment or replace existing jackets on the vessel. Additional benefits from rotary jet mixing include more uniform and repeatable fermentation results allowing a greater degree of planning, higher yield in the form of improvements to the real degree of fermentation, offering substantial profit if dilution of high gravity beer undertaken. Also yeast viability is positively affected by distributing the yeast in vessel and avoiding sedimentation which also avoids hot spots and autolysis. Stabilisers and fining agents can also be easily mixed into the vessel volume by using the ISO-MIX rotary jet mixing head.

This website uses cookies to improve your experience while you navigate through the website. Out of these, the cookies that are categorized as necessary are stored on your browser as they are essential for the working of basic functionalities of the website. We also use third-party cookies that help us analyze and understand how you use this website. These cookies will be stored in your browser only with your consent. You also have the option to opt-out of these cookies. But opting out of some of these cookies may affect your browsing experience.
Necessary Always Enabled
Necessary cookies are absolutely essential for the website to function properly. This category only includes cookies that ensures basic functionalities and security features of the website. These cookies do not store any personal information.
Non-necessary
Any cookies that may not be particularly necessary for the website to function and is used specifically to collect user personal data via analytics, ads, other embedded contents are termed as non-necessary cookies. It is mandatory to procure user consent prior to running these cookies on your website.
SAVE & ACCEPT
Contact Us
X